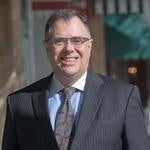 Bruce Galloway is a trial and appellate attorney.  He tried cases throughout Southern Missouri, from the boot-heel to the Kansas county line.  He handled appeals in the Southern District Court of Missouri, the Eastern District, the Missouri Supreme Court and the 8th Circuit Court of Appeals. He received the Adelman award for appellate advocacy for his work on a case that changed the law as to criminal contempt.

He lives in Ozark, Missouri with his wife Sarah and his stepdaughter.   The both live in the historic center of Ozark.  He owns a law practice on the town square.  She owns a funeral home on a historic street lined with Ozark's remaining Victorian homes.

Like his wife, Bruce is an active member of the community.  In 2020, the Ozark Chamber elected him Citizen of the year.  In 2020, he was elected to a third term to city council (Board of Alderpersons).  He is a member of Ozark's Rotary.  He previously served as President of the Christian County Bar, of which he is a member.  He is a former board member of the Ozark Chamber of Commerce.  He serves on the chamber legislative committee as a liaison with the city of Ozark.  While practicing criminal defense, he served on the Board of the Missouri Association of Criminal Defense Lawyers.  He earned the Robert Duncan award for excellence in appellate advocacy.  He is a present member of the Springfield Metropolitan Bar Association and the Association of Missouri Mediators.

In 1988, he attended the nationally top ranked Washington University School of Law in St. Louis.  There he served as a member of Phi Alpha Delta, elected to student government and served on the school's Academic Committee.  He graduated law school in 1991.

He enjoys, hiking, biking, kayaking, the symphony, theater, opera.  Mostly he enjoys being with family.  He was raised by career military father, William Galloway, and his European mother, Carla Galloway.  They taught him the values of ethics, family, diligence and that effective advocacy requires a fair mind.